See your data in STATLIA MATRIX. 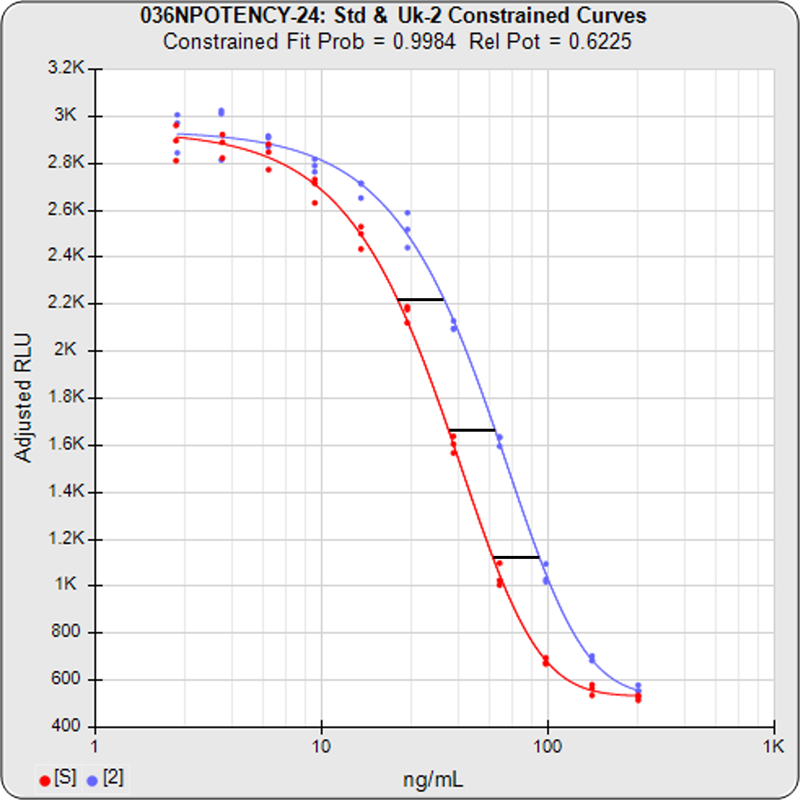 Testing for parallelism (similarity) between the two dilution curves is a prerequisite for determining the relative potency of two bioactive substances in biological systems. When the two substances are not parallel (not similar), there is no meaningful relative potency between the reference standard and the test sample. Parallelism testing is also used for matrix effects (linearity), cross-reactivity, interfering substances, concentration estimation, and inhibition studies.

The dilution series can span a full dose response nonlinear curve or a more limited linear set of doses.  The advantage of a full dose response curve is that some differences between substances only appear at high or low doses, and relative potency is more accurately determined.  But the more limited number of doses needed for a linear comparison is an advantage for animal studies and requires simpler math computations.

The three main approaches to assessing the parallelism between substances are the Equivalence Method (empirical test), the RSSEnonpar Method (direct measure of parallelism), and the F Test (hypothesis test).  The first method compares the confidence intervals of the regression parameters, and the other two approaches utilize the residual method from regression statistics (also called the extra sum of squares method).   All of these methods are cited in the USP 1032, 1033, 1034 and EP 5.3 guidelines and are available in STATLIA MATRIX.

Each Potency Method Uses the Most Accurate Computations In the Industry

Residual Parallelism includes the RSSEnonpar Method (sometimes called Chi-Square Method) and the F Test and is a measure of the similarity between the weighted residuals2 of the individual dilutions of the two 5PL or 4PL curves or the linear regression of two lines.

With RSSEnonpar Method, STATLIA MATRIX uses the weighted residuals2 between the observed points and their respective curves to provide an actual measure of the amount of parallelism between the two curves or lines to determine parallelism.

Confidence Interval Parallelism (also called the Equivalence Method), is a measure of the similarity between the asymptotic end points plus the slope of the inflection point of the two curves. For linear regression, the similarity of the slopes is measured.

STATLIA MATRIX determines the confidence interval limits of each curve or line’s coefficients and then compares them to determine parallelism.

Curves Without Plateaus at One or Both Ends 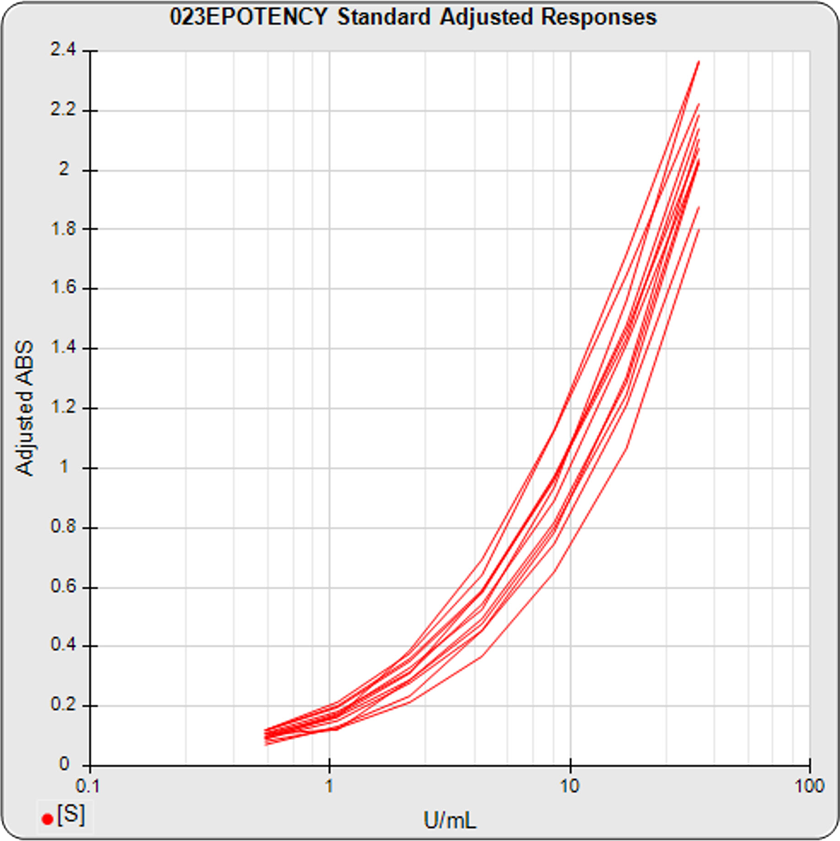 Some assay curves don’t reach saturation plateaus within a usable dose range. Potency assays with curves that do not have plateaus at one or both ends are not an issue with STATLIA MATRIX. 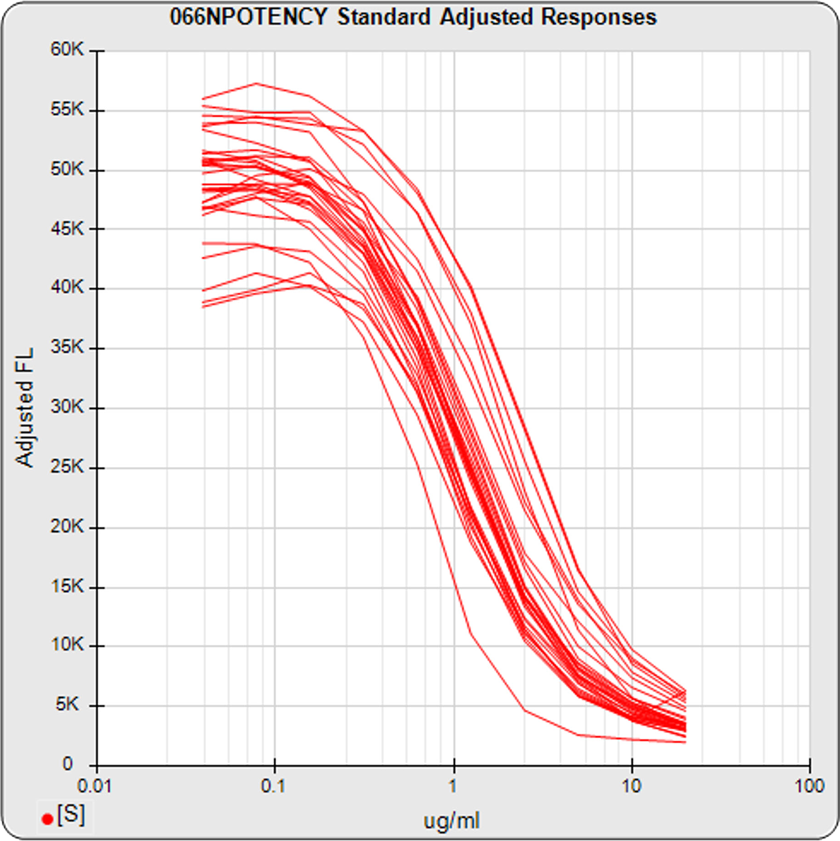 Hooks are often a problem when developing and running assays. And they can appear at different dilution doses from assay to assay. With STATLIA MATRIX, hooks and other nonmonotonic conditions are readily identified and can easily be masked.

These bad fits at the upper and lower ends of the 4PL curves show why bad fits affect parallelism and potency results. STATLIA MATRIX’s 5PL is the gold standard in analysis software and will easily fit your assays’ curves whatever their shapes. The manuscript: The Five Parameter Logistic: A Characterization And Comparison With The Four Parameter Logistic, has been requested over 5.000 times and been cited more than 300 times. STATLIA MATRIX is the industry software with the best weighting to meet the FDA guidelines for “appropriate weighting”. See the Tech Note: Curve Weighting for more information. 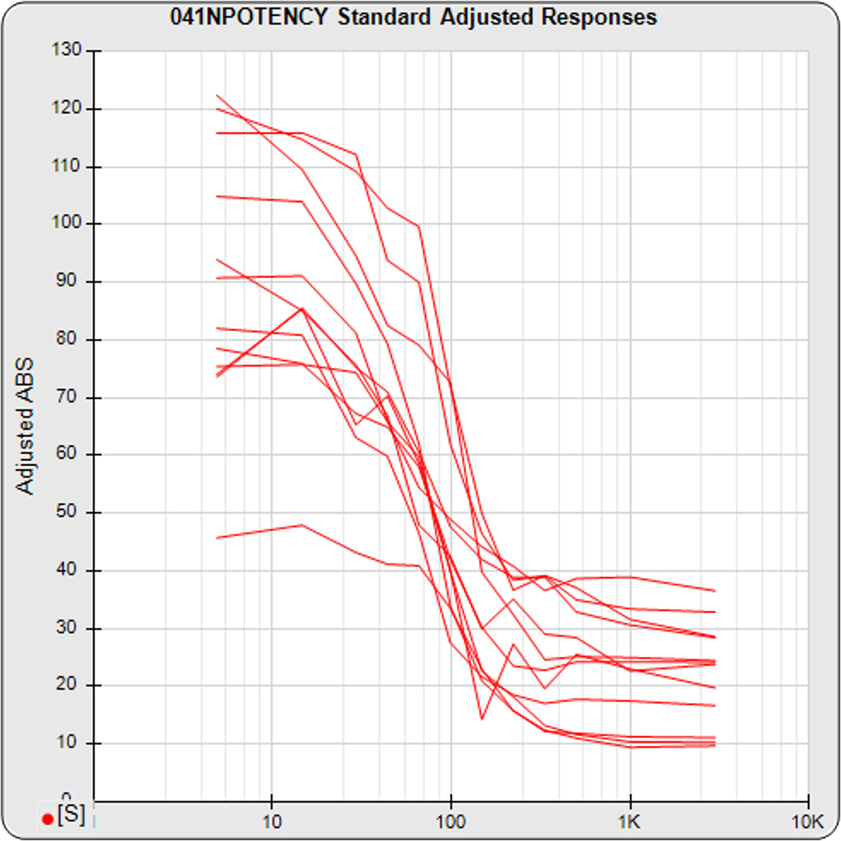 Developing a reliable cell-based assay can be a real challenge. STATLIA MATRIX has a wealth of tools to help you refine these tests and manage those bad boys.

Control dilution curves can also be assayed. Control relative potencies are compared to reference statistics from your pooled assays or tolerance ranges set by your laboratory for Pass/Fail determinations. 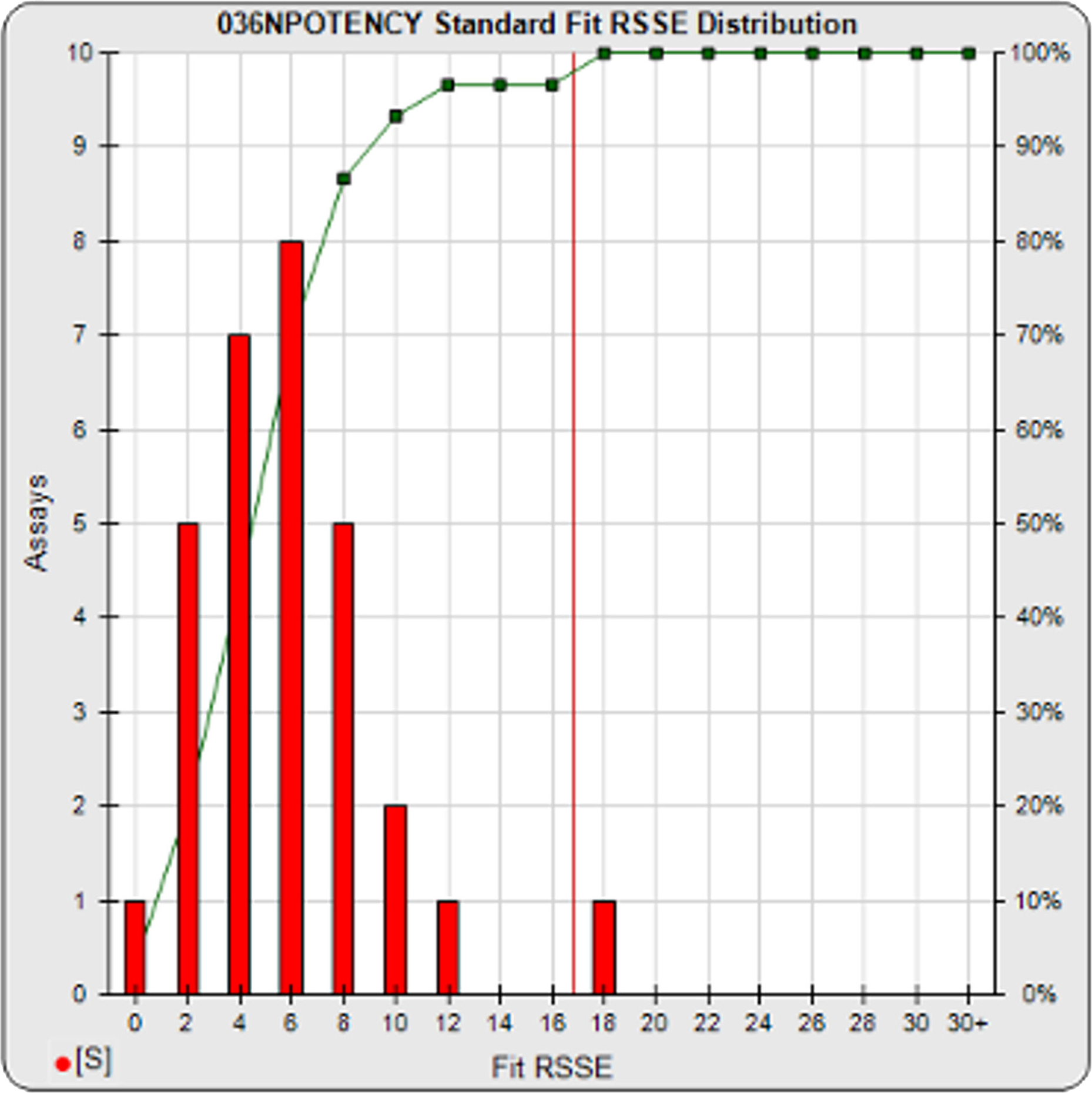 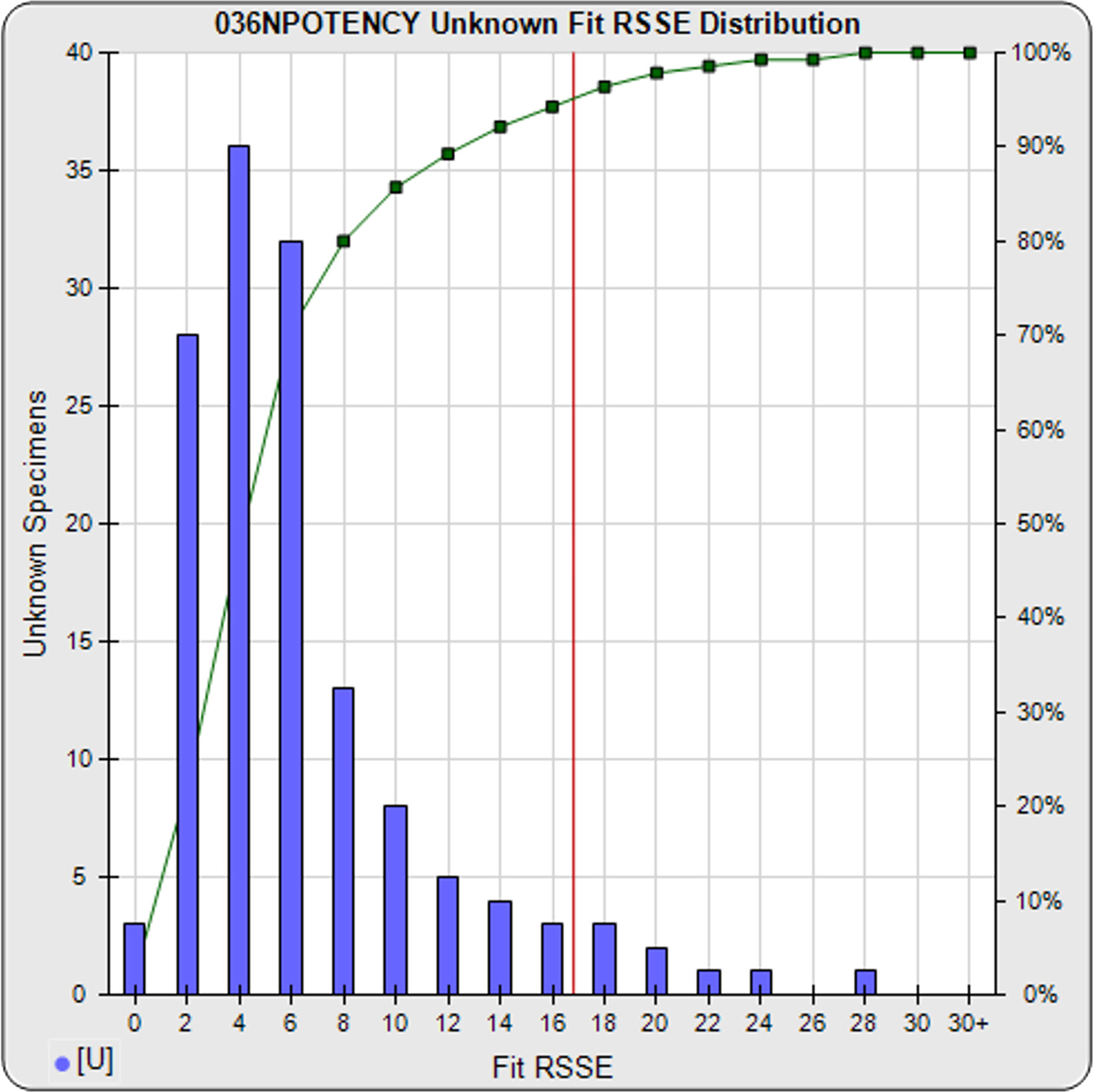 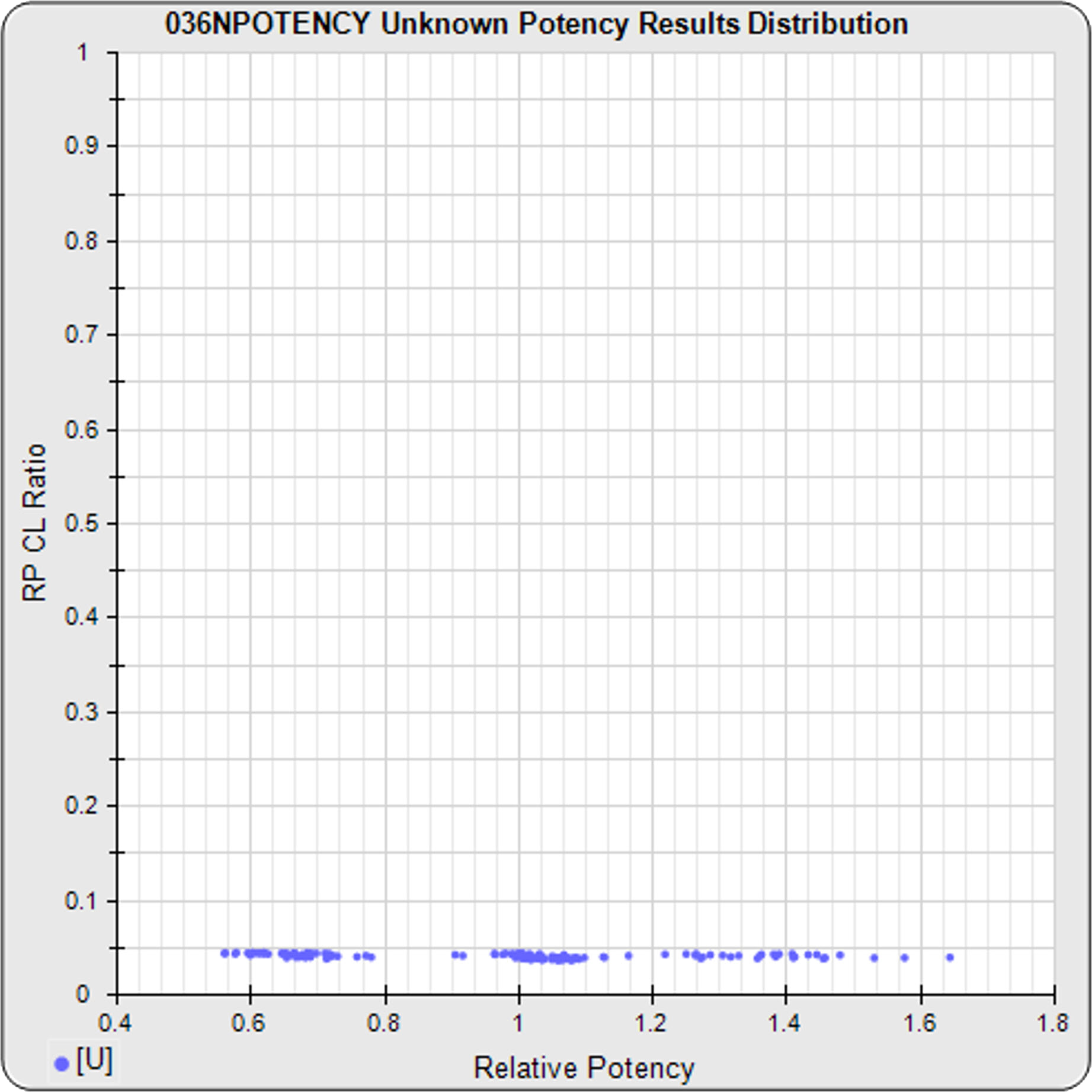 Use STATLIA MATRIX graphs and metrics of the data from a pool of your previously run assays to determine the stability and reliability of your potency test.  The standard and unknown Fit RSSE distribution’s show the suitability of the test for reliable potency determinations.  The red line shows the acceptance thresholds, either computed automatically by the software or set by the laboratory. The cumulative percentage of curves at each level of Fit RSSE is plotted on the right axis in green. 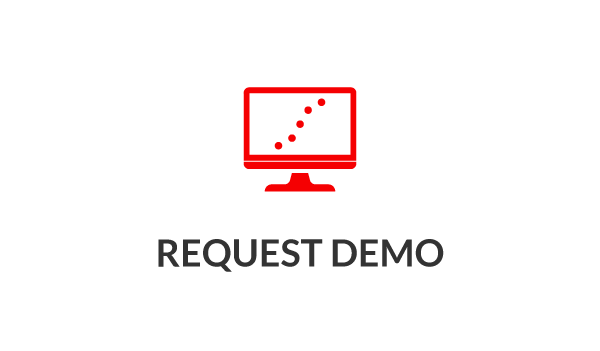 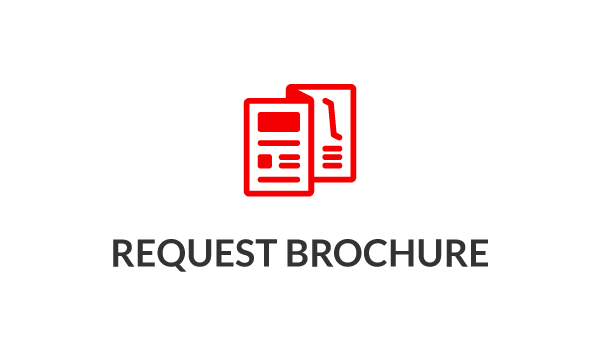 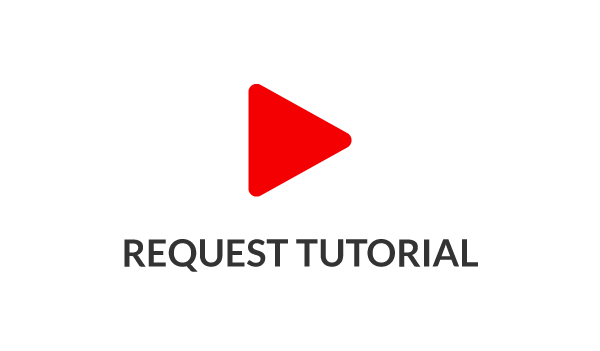